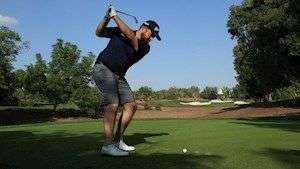 France’s Mike Lorenzo-Vera opened up a three-shot lead at the halfway stage of the DP World Tour Championship as “big dogs” Tommy Fleetwood and Jon Rahm set up a showdown for the Race to Dubai.

Lorenzo-Vera added a second round of 69 to his opening 63 at Jumeirah Golf Estates to finish 12 under par, matching the record 36-hole total at the season-ending event.

However, the 34-year-old, who is seeking a first European Tour title, was left to rue a poor finish which allowed Fleetwood and Rahm to get within striking distance as they aim to overhaul Race to Dubai leader Bernd Wiesberger.

Lorenzo-Vera made the ideal start with birdies on the first and second and was six shots clear after playing the opening 14 holes in five under, but bogeyed the 15th and also three-putted the last.

“It was not super enjoyable because it’s tough out there today,” the world number 96 said. “I missed a couple of shots at the end and made a three-putt on the last.

“It’s just the game. I’ve got three shots lead and it’s better than three shots behind. It’s just going to be stressful because it’s big dogs behind me that are going to try to bite me, so it’s going to be interesting.”

In contrast to Lorenzo-Vera’s poor finish, Fleetwood played the final five holes in two under par and Rahm covered the same stretch in four under thanks to birdies on the 14th and 16th and a brilliant eagle on the last.

“I was jealous of Rory yesterday so I tried to copy that,” Rahm joked in reference to Rory McIlroy’s eagle on the same hole on Thursday.

“I actually had quite some doubts. It was 236 metres to the pin, 245 to cover the water on the left side. The wind came in from the right. It had to be a perfect 5-wood to get all the way there.

“If it missed it could potentially go in the water and for a 3-wood long right or long left is not a good spot to be on that hole. I decided to be brave on that one and hit as hard a 5-wood as I could hit and it came out; I could not have hit a better shot.”

Fleetwood’s 68 left him top of the projected Race to Dubai standings after leader Wiesberger could only add a 71 to his opening 70 to lie in a tie for 13th on three under par.

Among the numerous possible scenarios, Fleetwood can finish top of the money list for the second time in three years if he finishes outright second, with Wiesberger finishing lower than tied third with two others and neither Rahm or Open champion Shane Lowry winning the event.

“It’s just a classic case, really, of trying to stay in the moment and each shot as it comes,” Fleetwood said. “There’s a lot going on over the weekend. There’s a lot of different scenarios and players in the mix.

“There’s a lot of things going on around you, so the more internally focused you can be and the more you can just stay in your bubble, it will just be a great challenge going into the weekend trying to do that.”Rory McIlroy struggled to a second round of 74 in Dubai (AP Photo/Kamran Jebreili)

McIlroy cannot win the Race to Dubai for a fourth time and heads into the weekend six shots off the pace after following his opening 64 with a 74.

“It’s a very fickle game,” McIlroy said. “I’ve always said that one day it can seem very easy and someone up there says, no, not so fast, and brings you back down to earth. That’s golf. I battled through it.

“I’m still in with a shout to have a go at winning this tournament. Just need to stick the head down over the weekend and get in there and try to shoot a couple good scores.”

Lowry is nine shots back in a tie for 13th on three under after a 68.