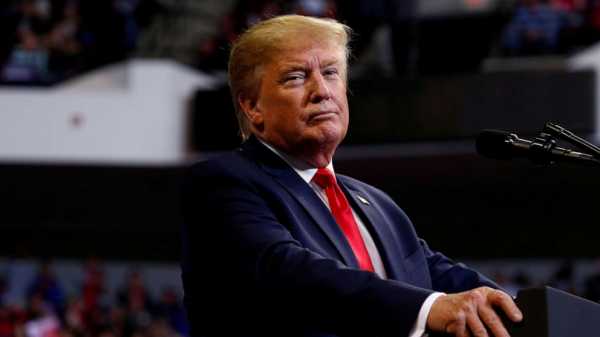 An overwhelming 70% of Americans think President Donald Trump’s request to a foreign leader to investigate his political rival, which sits at the heart of the House of Representatives’ impeachment inquiry, was wrong, a new ABC News/Ipsos poll finds.

A slim majority of Americans, 51%, believe Trump’s actions were both wrong and he should be impeached and removed from office. But only 21% of Americans say they are following the hearings very closely.

Still, nearly 1 in 3, 32%, say they made up their minds about impeaching the president before the news broke about Trump’s July phone call with Ukrainian President Volodymyr Zelenskiy, in which Trump urged his Ukrainian counterpart to investigate former Vice President Joe Biden and his son, Hunter.

The poll conducted by Ipsos in partnership with ABC News, using Ipsos’ KnowledgePanel, asked Americans how closely they were following the first week of public impeachment hearings in the House, their assessments of Trump’s actions and whether those actions warranted impeachment and removal from office. The survey also asked Americans when they decided on the matter. 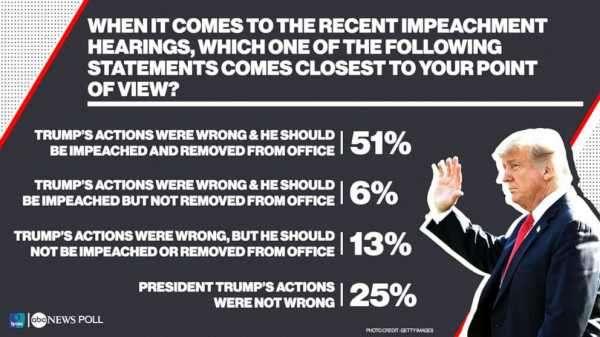 When it comes to the recent impeachment hearings, which one of the following statements comes closest to your point of view?

House Democrats are investigating whether the administration withheld nearly $400 million in aid and promised a White House summit between the two leaders in exchange for an investigation into the president’s political rival, Biden, and his son, for his place on the board of Ukrainian energy company Burisma.

After weeks of a steady stream of current and former administration and government officials testifying behind closed doors, three have so far appeared in public for the first impeachment hearings in over 20 years: George Kent, the deputy assistant secretary of state for European and Eurasian Affairs; Bill Taylor, the top U.S. diplomat to Ukraine; and Marie Yovanovitch, the former U.S. ambassador to Ukraine.

Overall, 58% of Americans say they are following the hearings very closely or somewhat closely (21% and 37%, respectively), and 21% say they made up their minds about impeachment after the first week of public hearings. Among those who said this, 60% think that Trump should be impeached and removed from office. 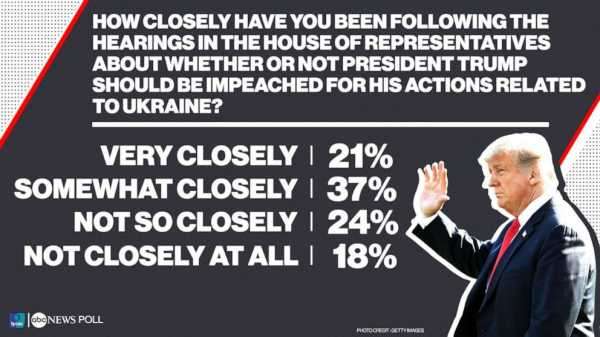 How closely have you been following the hearings in the House of Representatives about whether or not President Trump should be impeached for his actions related to Ukraine?

Of those following the House impeachment hearings very closely, 67% think Trump’s actions were wrong and he should be impeached and removed from office.

(MORE: Only 17% of Americans surprised by Trump’s actions tied to Ukraine: POLL)

The unfolding political drama between congressional Democrats and the White House reveals a polarized populace, with Democrats more united in their belief that Trump should be impeached and convicted than Republicans are in their belief that the president has committed no wrongdoing: 85% and 65%, respectively.